The first connected e-bike comes off the production line

With the M8i connected, Sparta responds fully to the current trend; the Internet of Things – in short referred to as IoT. The first bicycle with European internet connection has been manufactured. The functions of the M8i are activated via an accessible app.

Last week, the high-tech connected modules made by Axa bike security were delivered to Sparta in Apeldoorn. The first 250 of these connected e-bikes have now been produced via a specially designed production process. In the future, Sparta expects to make many more connected e-bikes and the app will also get new functionalities that will further increase convenience.

IoT makes use of the possibility to connect devices to the internet. This creates new benefits for the user. It means you can park the bicycle ‘virtually’. As soon as someone sits on your bike or moves it unexpectedly, you get a notification on your smartphone. If your bike has disappeared or you do not remember where you have parked it, you can always find it again with a handy track & trace card.

Push message to charge your battery
In addition to these security functions, the connected owner also gets a charge reminder, so he can be sure that his battery is fully charged in advance of the next ride. Marco Kalden, marketing manager at Sparta: “The bicycle also sends you a reminder when it is due for maintenance and has a handy self-service if a fault occurs outside the opening times of the bicycle store. In short; the M8i connected offers the user more convenience in use and offers increased theft prevention. The latter is not unimportant. Increasingly, the relatively expensive electric bicycle is becoming the target of bicycle theft. In addition, the opportunistic bicycle thief has given way to organized gangs that work professionally. This has also been thought of. Because if you do not feel like trying to get back the stolen bicycle, you will receive a new one when you report your stolen, thanks to the ENRA anti-theft insurance which is included with the bicycle during the first year.” 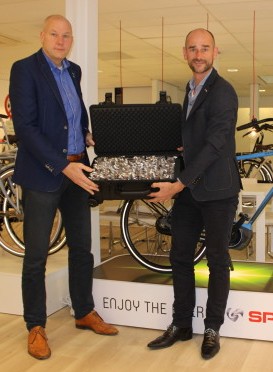